We believe that the Holy Scriptures, both the Old and New Testament, where given by God, through holy men of God, as they were moved by the Holy Ghost(I Peter 1:21). We accept the Textus Receptus manuscripts from which came the King James Bible. Because there are no 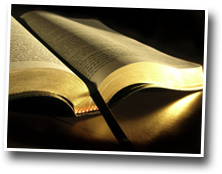 original manuscripts left, we believe the King James Bible to be the supernatural and providential preservation (Psalms 12: 6&7) of God’s inspired, inerrant, infallible, and perfect (complete) Word for this generation. We believe that this preserved Bible is the final authority for us in all matters of faith, doctrine, and practice.

We believe there is one God, who is the creator and sustainer of all things. We believe he has eternally existed in three persons: the Father, the Son, and the Holy Spirit.

We believe that Jesus Christ is the only begotten Son of God, eternally existing as Almighty God yet born of a virgin. Being Almighty God, He lived a sinless life. His death on the Cross was both sufficient and substitutionary for the sins of the whole world. After making atonement for the sins of the world with His own blood, He ascended into Heaven with a glorified body. Today He is seated at the right hand of the Father as Head of the Church, making intercession for the saints as our High Priest. In the future He will rapture out his Church before the Tribulation begins, and then after seven years He will return to set up His millennial reign in which He will rule and reign as the King of Kings and Lord of Lords.

We believe we are saved by the substitutionary death, and that by believing on Jesus we receive the righteousness of God on our account.  Therefore, we are eternally secure because He died to pay the penalty of our sin and when we believe on Him our penalty has been paid. Furthermore, because of having the gift of the righteousness of Christ on our account it is impossible to therefore be condemned.

We believe that the New Testament church is a called out assembly of baptized believers, whose goal is to win the lost, baptize them, and teach them to observe all that our Saviour commanded. The only two biblical offices of the church are the Bishop (pastor) and deacon. The two ordinances of the church are water baptism and the Lord’s Supper.  We believe the New Testament Church is a local, autonomous assembly (free from any external authority or control), and that each church is to be a local, autonomous church.

THE RAPTURE AND THE SECOND COMING

We believe that the rapture (the event in which Christ will call his Bride the Church, to meet Him in the air) is imminent. All New Testament believers will then stand before God to be rewarded for their service to God. Then all believers will enjoy the Marriage Supper of the Lamb for seven years.  We believe that during those seven years those left behind on earth will go through Tribulation and experience the wrath of Almighty God. After the tribulation, Christ will return with the saints to set up His thousand year reign on the earth. After the millennium, the dead(unbelieving) from all ages will stand before God, be judged, and cast into the lake of fire for all eternity, while all believers of all ages will enter into an eternity of joy in Heaven.

1. We believe that separation for the individual believer is: While we are in the world that we are not to be of the world, that we are to come out from among them and be separate. We are not to love the world neither the things that are in it. We are not to be conformed to the world, but to be transformed into the image of Christ. 2.  Separation for the church is separation from churches or groups who do not hold to the beliefs that are stated in the above doctrines. The church should also be separated from such groups as Ecumenism, Charismatics, and Neo-Orthodoxy, and that there is to be a separation of Church and State(the church is not to be controlled by the State).